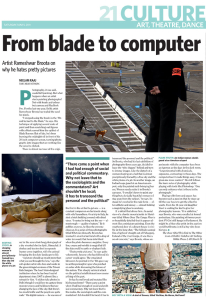 Photography, it was said, would kill painting. But what happens when an artist starts painting photographs? Not with brush and colour but camera and MacBook Pro. For the last one year, Delhi artist Rameshwar Broota has traded the easel for pixels.

“I stopped using the brush in the ’80s and turned to the blade,” he says. His technique of applying several coats of paint and then scratching out figures with a blade earned him the epithet of Blade Runner. But of late, he’s been burning the midnight oil in front of his 30-inch computer screen, turning photographs into images that are nothing like the ones he clicked.

There is almost no trace of the original in the seven-foot-long photograph of a dry riverbed shot in Spiti, Himachal. A donkey and tractor shot in separate frames come together, with the animal bringing the desolate landscape to life.

“A picture should say much more than what you see through the lens,” says the soft-spoken artist who lives and works in the green-fringed environs of the Triveni Kala Sangam. The Josef Stein-designed institution where he has been head of department since 1967 is almost like a retreat for him. “I seldom take photos in Delhi though I would love to capture those monster cranes and bulldozers that are changing the face of the city. But there’s too much traffic and the people are quite rude.” His digital camera — he was one of the first in the art frat to get one — is a constant companion on his travels along with wife Vasundhara. On a trip to Italy, he shot a brick building covered with dried vines. “I wanted to bring out the raw — almost rough — quality of nature.” Be it pebbles or pores, he likes the extreme close-up. In a series of three photographs titled What Lies Beneath, Broota has zoomed in on a human hand with a drop of water (or sweat) that turns into blood when the photo becomes a negative. Every line, crease and wrinkle is magnified till the skin could be earth or elephant hide.

“I hate pretty pictures,” he says quite vehemently. Anyone who has followed his career would agree. The emaciated labourers he painted in the ’60s gave way to anthropomorphic apes who perched on sofas while discussing the future of the nation. This sharply satirical attack on the political establishment now seems a thing of the past.

So has he mellowed and mutated like his human forms? “There came a point when I had had enough of social and political commentary. Why not leave that to the media, the sociologists and the commentators? Art shouldn’t be local; it has to transcend the personal and the political.” So Broota, who had his last exhibition of photographs three years ago, decided to leave the “trite slogans” behind and turn to intense images. Like the diptych of a woman sleeping on a bed that is almost precipitiously framed by a blue sky and the white plume of a jet. In another image, an Indian keeps guard at an American airport, only the painted nails betraying her sex. Women rarely make it to Broota’s canvases. “I wouldn’t know to paint anything but a lyrically beautiful woman so I stay away from the subject,” he says. Instead, he’s reveled in the male form — often athletic and sinewy — almost holding a magnifying glass to anatomy.

It is detail that drives him. An aerial view of a chaotic mountainside in Haridwar titled Where Does The Ganga Flow is so beautifully detailed that it appears almost like a miniature painting. Even the weathered door of a distant house is visible in the long shot. “The hillside seemed like a big basti straight out of Paharganj. Instead of the river Ganga, it was like a sea of concrete,” says Broota, whose experiments with the computer have been as rigorous as the days in the dark room. “I experimented with chemicals, exposures, contouring in those days. The computer hasn’t made things easy, it has given me more control.” He still follows the basic rules of photography while playing with tools like Photoshop. “One can only enhance what is there in the photograph.”

Playing with form and spaces has become such a passion that he stays up till the wee hours to get the effect he wants. Even his 12-year-old daughter Vasvi is waiting for dad to give her photography lessons. “It is addictive,” says Broota, who once excelled at formal portraiture. His painting of former president VV Giri still hangs in Parliament. He might be a blue-chip artist in the auction world but Broota is still a boy who loves his toys.

The show titled This End to The Other is on at Delhi’s Vadehra Art Gallery, Okhla Phase I, till March 31

Article republished from The Times of India, The Crest Edition

This site uses Akismet to reduce spam. Learn how your comment data is processed.